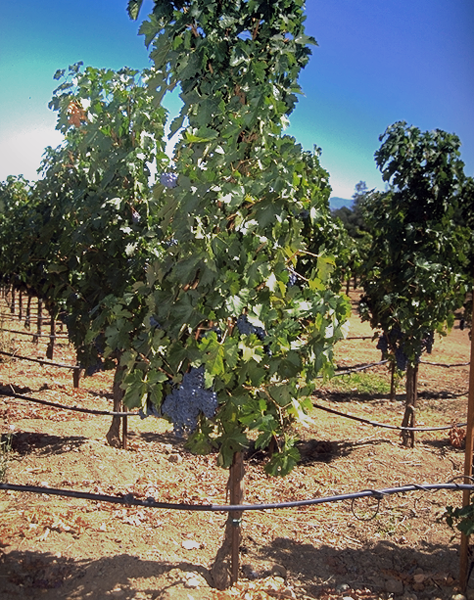 After a few glasses of wine if the truth comes out, winemakers will tell you of their favorite vineyard. The story is often the same...rocky soils, hillsides, and old, head pruned vines. The Spring Mountain estate a century ago had all three.

We can find dead head pruned vines from a century ago under the forests that over grew the estate. The classic text, California Fruits by Edward Wickson published in 1899 tells us how grapes were grown at that time.

But as time passed, the more economical and higher yielding cane or cordon pruning replaced the head training. The larger vines were spread out on wire over a wider spacing.

Now, over one hundred years later, the stressful soils of Spring Mountain are once again planted in vines trained with head pruning. The form is called the "gobelet" and it has been with us since the Romans spread grape culture across their empire.

Pictured at right is one such vine, this particular one at Chave, AOC Hermitage. It is head trained in a classic vertical gobelet. The head is low against the ground with four arms pruned to 2-bud spurs. The photo is from a Viticulture Report prepared by Lucie Morton, viticultural consultant for Spring Mountain Vineyard during their planning process for the replanting of the new estate.

More about the Gobelet Method: