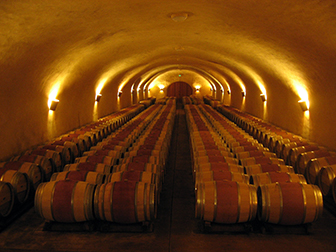 Caves for barrel storage are common in the wine country. Caves cost about the same or a little less than a normal industrial building. In the Napa Valley where wineries are concerned about the beauty of their property the costs of construction can be high and caves are a common solution.

Caves provide economical and dependable temperature control. You do not have to go too far underground until you have enough overburden of soil and rock between you and the outside to provide near perfect insulation. Since the average year round temperature in the Napa Valley is 59 to 60 degrees Fahrenheit; the temperature of caves in the valley runs about the same. This is perfect storage temperature for wine.

Energy to control the temperature of a good sized traditional cellar can run $1,000 to $2,000 a month. A cave requires no energy for temperature control. Also, caves provide a humid environment for barrels. As water and alcohol evaporate through the barrel staves the humidity builds up in a cave to about 95%. This, in turn, reduces evaporation and overall less wine will be lost due to evaporation.

Upon its acquisition in 1992 Spring Mountain's winery had a small wine cave connected to it. The cave (picture on right) was excavated in the 1880's by the founder of Miravalle, Tiburcio Parrott. It was 15 feet wide and extended about 90 feet into the hillside behind the winery. In the winery a few barrels were stored in the cave, but the majority of the barrels were stored in racks that ran to the ceiling inside the winery.

Most winemakers prefer not to store in barrel racks. In an ideal cellar, they would store and work their barrels one high; that is, not stacked at all. This is what Spring Mountain has chosen to do, though it may stack two high when the wines get to a stage in ageing where they need less attention. Doing this requires a lot of floor space and therefore the cellar at Spring Mountain had to be expanded.

Spring Mountain chose to expand their storage by excavating a cave that began on the opposite side of the hill from the winery. They tunneled under the hill, toward the winery, eventually connecting to Tiburcio Parrott's cave.

Since Spring Mountain will not ever stack its barrels more than two high the efficient utilization of floor space was critical. Most wine caves only utilize 40 to 50 percent of their floor area. Much of the square footage is taken up with wide aisles for forklifts to move barrels.