It’s not springtime but it sure feels like it here in Sonoma.  Clear, blue skies and a slight chill in the mornings probably in the upper 50’s, with the early afternoons warming up nicely but nothinglike the summer sun I’m used to in “Hot”lanta.  We spent much of our 2nd day of the Wine Blogger’s Conference tooling around in a bus up and around the windy roads of Spring Mountain.  Still very beautiful, but if you easily get motion sickness, you’ve been forewarned. 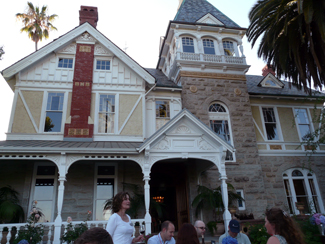 We ended our evening not far up the mountain at the aptly named Spring Mountain Vineyards, who owns about 845 acres of vines around one of the oldest wineries in the region.  Founded in 1885, it boasts a sweet Victorian home that was used as  backdrop for the unfortunately famous Falcon Crest soap opera of the 1980’s.  They only take appointments, but I think it is well worth it.  They recently bought an additional “ghost winery” further up the mountain that also boasts a home and pool they will gladly take you to see, though I did not get a chance to visit it myself.  A ghost winery is an existing pre-prohibition vineyard property and winery that is no longer in use.

Another interesting tidbit is that Spring Mountain Chardonnay came in 4th place at the famous 1976 France Tasting in which Chateau Montalena beat out the French and put California on the wine map.  They have also done a really good job with their Integrated Pest Management practices.  They’ve used dogs to sniff out mealy bug secretions around the vineyards to know where to release other insects to control the bugs.  Additionally, they learned that blue birds love sharpshooters that can damage crops via Pierce’s disease and have subsequently build bird houses around the vineyard attracting the natural predator.  An unfortunate casualty of the thriving nature, though, might be a century-old palm tree slowly being holed to death by a group of woodpeckers.  Can’t win ‘em all.

Their 2001 Elivette – a reserve wine was very powerful, with big fruit and velvety smooth.  I will be up front in telling you this is definitely a higher-end wine retailing $100+.  But, even if you don’t walk away with any bottles, you are going to really enjoy the experience.