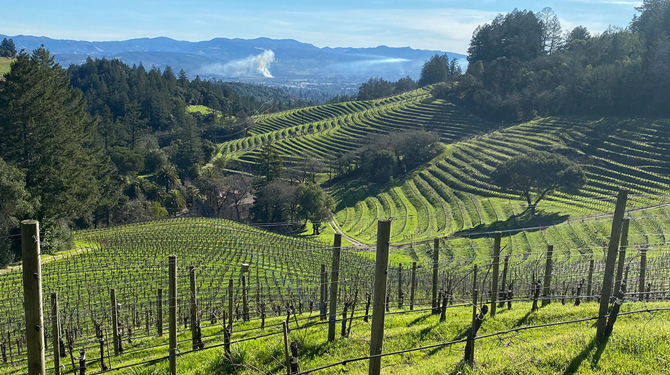 The historic Napa property's longtime vineyard manager has brought its vines—and wines back into form, and the future is even brighter. It's all downhill from here atop Spring Mountain. (James Molesworth)

I’ve seen some puzzling vineyards in my time. One had vine rows arranged in circles. Some have enough soil variability to make a geologist’s head spin. Others tucked up in the hills of Gigondas have no access road, making me wonder how they get the grapes out of there. I’ve seen sites so steep, I thought I might have vertigo. But I’ve never seen a vineyard as outright puzzling as the one at Spring Mountain Vineyard. The property, surrounded by York Creek Vineyard and Newton, is as complex a site as I’ve seen.

Granted, it’s actually four estates cobbled into one. Banker Jacob Safra bought the former Miravalle Estate, which had been renamed Spring Mountain Vineyard, in 1992 (it was famously the site for the filming of the 1980s TV show Falcon Crest). Then he added the neighboring Chevalier, Alba and Le Perla estates in 1993 and ’96. The result: an 847-acre conglomerate of land with 225 acres of hillside vineyards comprising 135 vineyard blocks covering eight soil series and every exposure point on the compass while ranging in elevation from 400 to 1,600 feet.

With that much to wrap one’s arms around, I asked vineyard manager Ron Rosenbrand what made him leave Charles Krug and take the job at Spring Mountain in 2003.

“I wanted to grow better grapes and make better wine,” he says with a smile. “Plus, my dad was the winemaker at BV, working on Georges de Latour from ’68 to ’79. He had experience with Spring Mountain fruit back then, and I remember him talking about some of these vineyards. I couldn’t say no to working with them myself.”

Rosenbrand, 61, has overseen changes in the vineyard here during his tenure. He’s rejiggered a few things. In 2018 he grafted 25 acres of Pinot Noir, Chardonnay and Syrah over to Cabernet Sauvignon, the winery’s strong suit. He’s also about to embark on a large replanting program, switching some of the terraced vineyards back to vertical rows to increase vine density, thus increasing production levels while maintaining low yields per vine.

But the biggest change has been piloting the vineyards—planted to a majority of Cabernet Sauvignon vines along with small amounts of Cabernet Franc, Petit Verdot, Merlot, Malbec and Sauvignon Blanc—away from conventional farming and into organic practices. The switch began in 2005 when they abandoned the use of pesticides and herbicides.

“It’s not an easy switch, and it comes at an expense, because you have to work everything by hand and it requires more labor,” says Rosenbrand. “But it’s not only important to the people who work in the vineyards, but to the land.”

We stop at a parcel of of Cabernet Sauvignon vines planted in 1974. Yields here have dropped so low they are no longer viable and they’re going to be pulled out and replanted soon. “If I had healthy 30- or 40-year-old vines, I’d keep them,” says Rosenbrand flatly. “We’re farming for longevity now, switching to cane pruning and using organics. Since stopping herbicides and insecticides the place has come back to life.”

There have been doubts along the way. An infestation of vine mealybugs, which can live under the bark of the vines and damage the fruit, was a scary episode, and Rosenbrand had to find the inner strength not to resort back to pesticides. Instead, a predatory wasp was introduced. One million ladybugs were released into the vineyards to battle leafhoppers. Snakes and feral cats are used to battle voles. And bluebird boxes were installed to tempt the birds in to go after glassy-winged sharpshooters. All of it with great success.

“Most of the vineyard team here predates me, so they’ve seen all the before and after. And they’re really excited by the changes,” he says.

The result is a much healthier vineyard that now allows Rosenbrand to get the production up. The mountain site has poor soils—good for quality, bad for yields. The site had been averaging a paltry 1.5 to 1.75 tons per acre. Just 4,500 cases of wine were produced here in 2016 (a fair amount of fruit was sold off). Production increased in 2018 and ’19 (both vintages saw large crops throughout Napa), a trend that should continue. After the new plantings go in, replacing the failing old vines, Rosenbrand sees production increasing to 2.5 to 3 tons per acre, which is still well within the range for producing high-quality wine.

Heading back down to the property's historic manor house, we taste, non-blind, a bottle of the 1988 Cabernet Sauvignon. It showcases the DNA of the site, a racy red beam of currant and cherry fruit pierced with notes of alder, iron and dried flowers. It’s got a tannic edge but acidic spine, giving it tension and energy throughout.

A bottle of the 2001 Spring Mountain Vineyard Cabernet Sauvignon Napa Valley offers a more youthfully intense mix of red berry fruit with a bright mineral edge. There’s a cedar frame around it all, but it’s very fresh and lively in feel.

The newly released 2016 Cabernet Sauvignon is very focused, showing its typical red fruit profile, with lots of savory, sassafras and mineral notes rippling through the racy finish. It’s another cellar-worthy beauty in the making.

The 2016 Spring Mountain Vineyard Elivette, a blend of Cabernet Sauvignon along with Petit Verdot, Merlot and Cabernet Franc, shows a plusher profile and warmer feel than the straight Cabernet, offering a fleshier take on the fruit while the savory notes hide more in the background. Both are excellent, though I feel the Cabernet has a more distinct sense of place.

Winemaker Barrett Anderson, 44, joined in August 2019, in time to vinify the vintage, so he’s still just getting his feet wet. But he worked with Chris Carpenter, the mountain fruit winemaking specialist behind the wines of Lokoya and La Jota, so Anderson's CV seems well-suited to Spring Mountain. And if it turns out that Anderson is the last piece to the puzzle, you’ll want to get in line now for future releases. This historic site seems primed to return to the consistent track record it had in the late ‘70s and ‘80s, producing distinctive, ageworthy mountain Cabernet.