Few big questions about wine permit a straightforward answer, but heres one for you: What is the best wine made in the United States? To my mind and to my taste, the clear answer is Cabernet Sauvignon from the Napa Valley. Sure, one could make a case for other wines such as Pinot Noir from Oregon or Merlot from Washington state. But if we lined up all the candidates in a massive tasting, I could show you a hundred different Cabs from Napa that would reduce all other contenders to mere pretenders. Youd leave that tasting with no doubt of the supremacy of Napa Cabernet.

However, I bet you would also leave with some questions, because you would have found not only general greatness in those hundred Cabs, but also a marvelous array of distinctively different characters. Why do the wines taste so different from one another? Why are they so disparate in structure and texture?

On deeper examination, you would find many partial answers to these questions, but one of the most important would be this : The Napa Valley isnt just a valley, but also the surrounding mountains.  And the widely differing contours, soils and microclimates of Napas mountains make for many unique-and uniquely delicious wines.

Napas Spring Mountain District offers a perfect starting point for exploring the Valleys mountain sub-regions, which I plan to do on occasion in future columns.

It is a legally established American Viticulture Area (AVA) with more than 30 wineries, and the wines provide an illuminating introduction to the intricacies of mountain viticulture.

The Spring Mountain viticulture area rises from an elevation of 400 feet above the town of St. Helena to a height of more than 2,100 feet near the Sonoma County line to the west. Spring Mountain is part of the Mayacamas range, and the general slope of the appellation slides from west to east.  However, the AVA also includes exposures (or aspects) to the north, south and west as a result of erosion incisions carved by York Creek as well as Sulphur and Ritchie creeks (which form the appellations southern and northern boundaries, respectively).

Topographical factors cause particular vineyards within the Spring Mountain District to differ in terms of altitude, slope steepness and aspect. Soils are also varied, running as deep as 40 inches above bedrock at some point but as shallow as six inches at others. Basic materials are predominantly volcanic or sedimentary. These soils tend to be poorer in nutrients and quicker to drain than those found on the valley floor, resulting in modest grape yields of about 2.3 tons per acre.

Temperatures within the appellation vary according to altitude, but the viticulture area as a whole has a significantly different climate than the valley floor, with cooler days and warmer nights. This difference results from a temperature inversion, which involves warm air from lower elevations rising in the afternoons and evenings and being replaced by cooler air that rolls down from the mountains (as well as fogs that are pulled in from the San Pablo Bay).  The peak daytime temperature up on Spring Mountain is often 10 to 15 degrees lower than on the valley floor, yet ripening is aided by additional hours of sunshine, as mountain vineyards are usually above the fogs that often shroud low-lying sites.

Spring Mountain is home to slightly more than 1,000 acres of vines, with 90 percent devoted to red grapes. Bordeaux varieties predominate, as Cabernet Sauvignon comprises 56 percent of planted acreage, and Merlot another 18 percent. Dribs  and drabs of other varieties make up the balance, with only Chardonnay reaching the level of 5 percent. 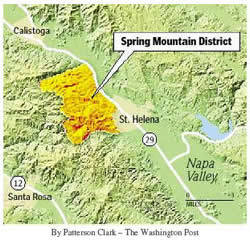 As a result, most of what youll find on store shelves from Spring Mountain will be either Cabernet, Merlot or a Cabernet-based, Bordeaux-style blend. What youll find in the bottle will be variable, of course, due to differences in growing conditions and stylistic preferences from producer to producer. However, my tasting experience suggests that Spring Mountain reds really do cluster around an identifiable profile. On one hand, they tend to be more densely concentrated and intensely flavored than wines from the flats or lower slopes of Napa Valley. Yet they are notably softer in texture, lower in acidity and easier to appreciate when young than the reds of Howell Mountain, Mount Veeder or Diamond Mountain. Top reds dont come cheap from any of Napas districts, and Spring Mountain is certainly no exception, because yields are low and vineyard work is tough on high altitude slopes. However, the best Spring Mountain reds are stunningly delicious, and any largess you may retain from holiday gifts would be well invested in one of the following beauties.

Recommended wines are listed in order of preference, with approximate prices:

Spring Mountain Vineyard Elivette 2001 ($90): A marvel of complexity and integration, this features gorgeous, ripe berry fruit accented with notes of wood smoke and vanilla.  Packed with flavor, but soft and smooth in texture.

Cain Vineyard Cain Five 2001 ($90): Meaty and robust, this is a dense wine with intense flavors that will gain softness and complexity over the course of the next decade.

Marston Family Vineyard Cabernet Sauvignon 2001 ($65): This is a whopper at 15.4 percent alcohol, yet it isnt remotely hot. The proportions are just right, with lots of fine grained tannins lending definition to the deeply ripe blackberry fruit.

Robert Keenan Winery Cabernet Sauvignon Reserve 2001 ($79): With fine balance between deeply flavorful fruit, ripe tannins, and smoky oak, this is enjoyable now but likely to become even better with another two years of aging.

Frias Family Vineyard Cabernet Sauvignon ($65): This is slow to unwind but marvelous after a couple of hours, with deep, sweet fruit flavors and just a little oak in the background.

Barnett Vineyards Cabernet Sauvignon 2002 ($60): A pretty big wine at 14.2 percent alcohol, yet surprisingly delicate in flavor and approachably soft in texture, even at this young age.