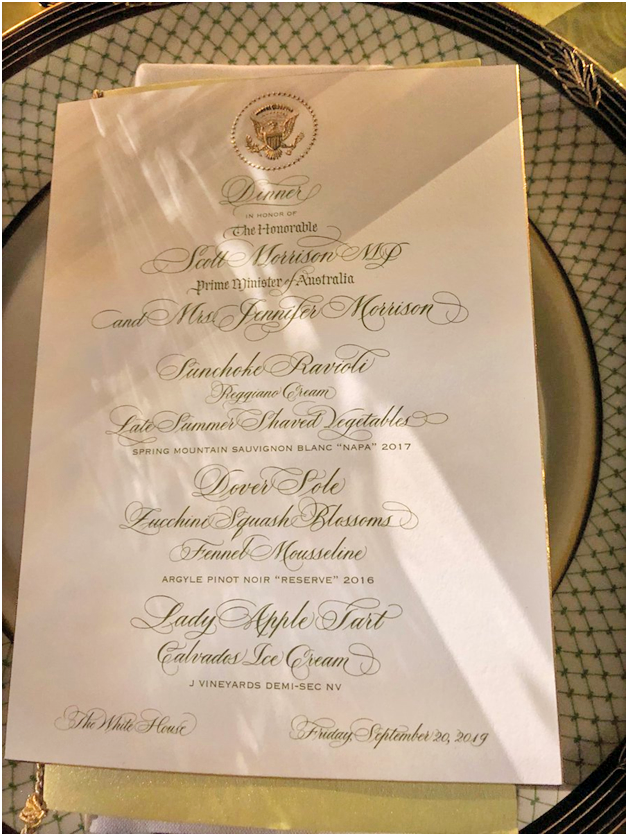 Tonight, the First Lady will open the Rose Garden for a press preview of the State Dinner table setting and décor. The Office of the First Lady shares the following details, which were all carefully selected by the First Lady to reflect the strong ties between the United States and Australia. The First Family warmly welcomes the Prime Minister and Mrs. Morrison and looks forward to strengthening one of America’s most important and enduring relationships.

On Friday morning, the President and First Lady will welcome the Prime Minister and Mrs. Morrison of Australia during the State Arrival Ceremony on the South Lawn of the White House. The Trump Administration is proud to carry on the traditional military arrival ceremony, which has been part of our Nation’s history for centuries. Nearly 500 members of the United States Armed Forces from the five military branches will be present on the South Lawn for the “Review of the Troops.” Those invited to attend the arrival ceremony include the President’s Cabinet, Members of Congress, military families, and guests of the Australian Embassy.

The colors chosen for this visit are green and gold, which are the Australian national colors. These colors were derived from the national flower of Australia, the golden wattle, which has a yellow flower and green foliage. The dinner is being held in the Rose Garden, which will be filled with American varieties of yellow and white roses. Gold woven baskets filled with yellow garden roses and golden wattle signify the combined friendship and long-lasting relationship between the United States and Australia. Ombré shades of yellows and greens were chosen for the table linens, and the tables will be illuminated with gold oil lamps. Golden champagne grapes will be placed on top of the tables, highlighting the richness of each of the countries’ wine industries. The china settings for the baseplate and dinner service will consist of alternating patterns from the administrations of Presidents William J. Clinton and George W. Bush.

The evening’s performance will be the largest gathering of premier military musicians for a State Dinner at the White House. The entertainment will feature musical groups from the United States Army, Marine Corps, Navy, and Air Force:

The Cross Hall urns will be filled with pear branches from New England. The dinner centerpieces will feature more than 2,500 roses from California in shades of yellow and Australia’s national floral emblem, the golden wattle. The Ground Floor Corridor will feature garden roses, jasmine vines, and dahlias, all grown in the United States.

The menu for the State Dinner with Australia highlights the lush, late summer season across the vast lands of America. The menu pays homage to Australia’s special blend of culinary adaptations from its various cultures, not unlike the diverse food traditions of the United States. The first course will be Sunchoke Ravioli with Reggiano Cream and Shaved Summer Vegetables. Sunchokes, known as “earth apples,” are native to North America and will be roasted and puréed to give creaminess and sweet notes to the ravioli. The pasta is drizzled with a lemony Parmigiano-Reggiano cheese emulsion and topped with shavings of sun gold carrots, baby kale, and sunchoke chips. The main course will be Dover Sole, roasted whole, then fileted and accented with Fennel Mousseline. Adding color to the plate will be the tender green and yellow summer squash blossoms, which will be picked the day before the dinner. The combination of the mild and sweet Dover Sole, the creamy fennel, and the citrusy garlic rouille is finished with an abundant variety of perennial herbs from the White House Kitchen Garden.

Dessert will be an American classic: Lady Apple Tart with Calvados Ice Cream. The dessert will be made of layers of sliced apples with a flaky crust. The Lady apples are sourced from Pacific Northwest and Mid-Atlantic orchards. The filling combines unique flavors of sweet and tart with caramelized apples, cinnamon, lemon zest, vanilla, and brown sugar with hints of molasses.

The Spring Mountain Sauvignon Blanc 2017 is the product of Spring Mountain Vineyard located in Napa Valley, where wine grapes have been cultivated since the 1800s. Bright floral aromas characterize this wine, and its notes of lemon zest and green grass complement the Sunchoke Ravioli.

The Argyle Pinot Noir “Reserve” 2016 is the heralded result of a combination of Australian innovation and American ingenuity. Innovation and technological advancement have long been hallmarks of Australia’s winemaking culture. The light and lively red fruit notes of cherry and raspberry pair well with the subtle sweetness of the Dover Sole. Notes of green herb heighten the anise flavor of the Fennel Mousseline and the fragrant flavors of herbs fresh from the Kitchen Garden. The well-integrated tannins and minerality from the volcanic soil of the Willamette Valley add balance and smooth complexity to this Reserve Pinot Noir.

Finally, the J Demi-Sec NV partners well with the Lady Apple Tart. Notes of ripe pear and acacia honey are perfect accompaniments to the autumnal caramelized apples featured in the tart. The creaminess of the Calvados Ice Cream is pleasantly counterbalanced by the Meyer lemon curd acidity that appears at the first sip and lingers through the intriguingly long finish.

The guest list and First Lady’s gown details will be released at the beginning of the dinner.