Details to be shared at Feb. 21 town hall meeting in Yountville

St. Helena, Calif.—Napa Valley's Spring Mountain Vineyard has found an innovative and environmentally friendly way to deal with vine mealybug (VMB), one of the most destructive of all insect vineyard pests. Vine mealybug first entered Central California vineyards in 1998, and has since spread to 17 counties, including Napa and Sonoma. 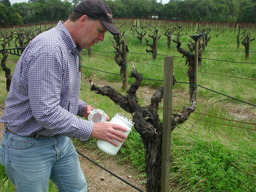 For three years, Spring Mountain vineyard manager Ron Rosenbrand had been fighting a losing battle against VMB. Though he was able to keep the bug isolated to one small vineyard block using traditional methods—diligent passage of equipment and employees through the affected vineyard block, and county-recommended pesticides—he was making no progress on eradicating it. In the hope of finding an environmentally friendly solution to the problem, he contacted UC Berkeley researchers and began an experimental practice based on their cutting-edge research and technology. After presenting his case to the Napa County Agriculture Commission, Rosenbrand became the only grapegrower to get permission to use a biological offense against VMB.

"While the jury is still out on how effective bio-control is versus traditional methods, our early indications from last year were very promising," Rosenbrand told Wines & Vines.

For the past year, Rosenbrand and UC Berkeley have pioneered a biologically integrated program designed to eradicate vine mealybug. They began to systematically release several species of predatory and parasitic insects into the affected portion of the vineyard. From April to November of 2006, at two-week intervals, Rosenbrand released several species of beneficial insects into the vineyard. In total, he released 570,000 ladybugs, 350,000 green lacewings, 35,000 mealybug destroyers and 12,000 minute pirate bugs. All of the insects directly feed on vine mealybug in its adult or larval stage. Since one female vine mealybug can deposit up to 700 eggs at a time and produce four to seven generations in a single season, interval releases kept a constant population of beneficial insects in place to combat the vine mealybug's overlapping generations.

UC Berkeley researchers also released two species of parasitic wasps, Coccidoxinoides Peregrins and Anagyrus Pseudococci, into Spring Mountain's vineyard. A total of 95,000 of the tiny Coccidoxinoides wasps measuring just 1/32 of an inch each, were released. Of the Anagyrus species, both male and female wasps were released. The adult wasps lay their eggs inside the bodies of the adult vine mealybug. As the new wasps hatch, they naturally feed on the mealybug.

"Of all the predatory and parasitic insects we used in the vineyard in 2006, the parasitic wasps, Anagyrus Pseudococci, were most effective in helping control vine mealybug," Rosenbrand noted.

In conjunction with the predator releases, Rosenbrand deployed UC Berkeley's experimental pheromone cards in the vineyard. Meant to disrupt mealybug mating, the cards emit the odor of the female, thus confusing the male and making it difficult for him to find a mate. Females can still reproduce without males, but don't lay nearly as many eggs. "The mating disruption only targets the male vine mealybug and is nontoxic to the other beneficial insects in the vineyard," Rosenbrand said. Spring Mountain workers have repeatedly observed ladybugs eating vine mealybugs in the affected portion of the vineyard. UC Berkeley researchers monitored Spring Mountain Vineyard throughout the growing season and found large percentages of VMB that had been parasitized by wasps. In the isolated infected block, Spring Mountain Vineyard saw a 50% reduction in the numbers of the pest during October, traditionally the most prolific month for VMB.

Rosenbrand will share details of his VMB eradication practice during a grower panel discussion on Feb. 21. The town hall meeting will take place at the Yountville Veteran's Home (Grant Hall), from 1-4:30 p.m.