As old as dirt, mycorrhiza is taking Napa Valley’s vineyards back to nature

In the case of a microbological fungus that promises a future of disease-resistant rootstock in the vineyards, it has taken 460 million years to reach the Napa Valley.

St. Helena nurseryman Bruce Coulthard is the driving force for the beneficial fungus, mycorrhiza — which has the scientific name of Ectomycorrhizal fungi. Either name is difficult to pronounce, but it has had a pronounced effect on all plant-life that it has been introduced to — including trees.

A tree nursery Coulthard owned several years ago, in fact, was where he began experimenting with mycorrhiza. It was not long before “lumber companies came to us because our trees were so superior,” he said. For the Pacific Northwest, Coulthard annually grew five million redwood transplants in his Napa Valley nursery.

There’s nothing really new about mycorrhiza. It is, quite literally, as old as dirt. “Europeans understand it, American people have not,” said Coulthard. Among the last to catch on, he said, are many Napa Valley grapegrowers. About 1,700 acres in the Valley acres have been adapted so far.

“The goal is to make sure that the grape industry has disease-resistant rootstocks,” Coulthard explains. “Put them in the ground and they’ll last 100 years like the old-timers did when this was a zinfandel area. Those vines are still growing uninterrupted because back then man didn’t mess with the soil.”

Coulthard said that Dr. Robert Linderman, for decades a researcher at Oregon State University and a principal authority on mycorrhiza, and Nick Freemeyers, a forester in the Northwest, “taught me everything I know about” mycorrhiza.

A research document by Linderman describes how mycorrhizal fungi wraps itself around the outside of a plant’s roots without penetrating the cell walls, essentially forming a sheath that stimulates root growth.

Now Coulthard wants to take it to the next level and in the process create:

–More efficient root systems, reducing water needs by 20 to 40 percent;
–Better adaptation to soils; and
–A better natural-growth, or hyphel, system in which plants more efficiently take up nutrients and water, and, as a result, grow healthier.

“Basically, mycorrhiza is right at the pinnacle,” he said. “But it’s not just mycorrhiza. It’s all those other components in the soil that work together. Without those components it won’t work as well.”

And those components are…? Coulthard isn’t saying because that proprietary secret is the bedrock of Genesis, the family business he started 15 years ago. He is a man who is well-rooted in Napa Valley vineyards, having planted a good many of them, and claims to have operated the largest private nursery in California.

Coulthard is just now beginning to market a product under the label of Rhizo-Gen, which is trademarked.

He has a strong proponent in Spring Mountain Vineyards’ premier vineyard manager Ron Rosenbrand, who employs a number of organic-growth practices, including the application of mycorrhiza during the past 10 years, the most recent five in association with Coulthard.

“I think it’s a mindset where to bring something back and to gather all the data it is going to take time, it takes growing seasons. You can’t just do it like that,” said Rosenbrand, who deplores what he calls “immediate-gratification growing.”

“Organic growers take the patience to replenish beneficial microorganisms in the soil,” he said.

Said Coulthard: “You are killing the golden goose. People are force-feeding (vines) fertilizer because they’re getting instant results, but they are going to continue shocking their plants with loads of fertilizer. It’s going to react as a sterile plant. It’s not going to be able to combat diseases.”

In many cases, he said, force-feeding vines has led to instances when vines that should have been approaching their prime after seven to eight years had to be pulled.

At Spring Mountain, Coulthard said, “Grape vines that were inoculated with mycorrhiza were 48 inches tall in the first growing season. The ones that were not inoculated from the same lot were about half that.”

Inoculation is accomplished through drip systems after about two hours of irrigation.

“You will see the color of the water change,” said Coulthard. “After that’s completed, you follow up with a gallon or two afterward. Fall is a very good time to apply because that’s when the temperatures are down and you get most of your root growth. The plants naturally anchor themselves in for winter. In spring you don’t have to catch up, because the plant has already stored carbohydrates over the winter.”

Augmented by the documented success in the vineyards of Spring Mountain, Coulthard said he hopes to change the way grapes are grown.

“There is no place else in the world I know of that has done this kind of report,” he said. 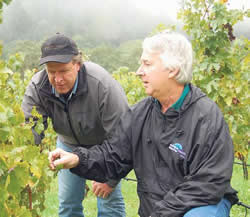 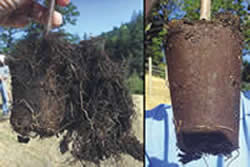 The two grapevines here, says Bruce Coulthard, ‘tell the story.’ The mycorrhiza-treated vines spread, left, are better able to adapt to soils, as well as take up water and nutrients. Submitted photos