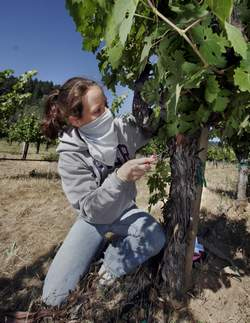 An insidious vineyard pest that is threatening some of the finest vineyards in California may have met its match in Ron Rosenbrand.

The vineyard manager at Spring Mountain Vineyard outside St. Helena, Rosenbrand has spent four years doing everything he can to make life miserable for the vine mealy bugs that stubbornly cling to about 10 acres of his cabernet sauvignon vines.

He has trained his employees how to spot them, cut off their escape routes, and doused them with potent insecticides.

But when it became clear last year that the resilient little white vine-suckers were standing their ground, Rosenbrand called in reinforcements — more than a million of them.

He and a team of scientists from UC Berkeley carpet-bombed the infected portion of his vineyard with an army of beneficial insects they hoped would seek out and destroy the vine mealy bugs — naturally.

While it’s too soon to declare victory, Rosenbrand, UC researchers and the Napa County agricultural officials closely monitoring the project say they are very encouraged by signs the mealy bugs are in retreat.

“We’re taking a stand,” said Rosenbrand last week after releasing 200,000 ladybugs and thousands of teeny wasps over about 10 acres of infected vines. “It’s encouraging that we’re seeing a reduction instead of it going the other way.”

The stakes are high for Spring Mountain Vineyards, which would be devastated if the bugs spread throughout its 225 acres of hillside vines.

The historic winery was one of the California wineries that bested French rivals in the famed 1976 Paris tasting. It also achieved notoriety for serving as the set of the prime-time ’80s drama “Falcon Crest.” It is now owned by Swiss businessman Jacob Safra.

While vine mealy bugs usually don’t kill the vine, they can render grape clusters useless for winemaking. As females feed on the vines, they excrete a sticky substance called “honeydew” that ruins the fruit.

Spring Mountain is far from alone in facing this threat. Since it was first identified in Riverside County vineyards in 1994, the vine mealy bug has spread to 17 California counties, including Napa and Sonoma, placing much of the state’s 522,000 acres of vineyards at risk.

Through voluntary reporting and aggressive monitoring, Napa County has identified 53 vineyards covering 500 acres where vine mealy bugs are present. While just over 1 percent of Napa’s 45,000 acres, the infested acreage has been growing annually since the pest was first identified in the county in 2002.

“The problem with vine mealy bug is it is very difficult to kill and their populations can build up very quickly,” said David Whitmer, Napa’s agriculture commissioner.

They are prolific breeders, with multiple generations overlapping one another. They also are tough to reach with insecticides because they burrow under the vine’s bark and even hide in the vine’s roots.

In addition to the honeydew problem, vine mealy bugs can transmit the leafroll virus, which can prevent grapes from ripening properly. They also can spread very easily from vineyard to vineyard.

“When you have a pest that can be spread by wind, on leaves, by people and equipment, it’s going to be challenging to have it stay in one place,” said Greg Clark, Napa’s assistant agricultural commissioner.

Napa County is taking an aggressive approach to the problem, requiring stringent management practices to prevent its spread. Central to this plan of attack is regular applications of insecticides, some of which are toxic.

The vine mealy bug is spreading in Sonoma County, too, especially in the Carneros region, but it is difficult to say how quickly, said Nick Frey, president of the Sonoma County Winegrape Commission. Sonoma County does not have a tracking program like Napa County, which means there are no good data on the number of sites or acres infested, Frey said.

Unlike Napa County, which has declared eradication of the pest its goal, Sonoma County growers are resigned to its presence, focusing on slowing its spread instead of eliminating it entirely, Frey said.

Rosenbrand said he went to Napa County agricultural officials in 2003 with his problem and they gave him a very specific regimen that included significant insecticide spraying.

“I didn’t want to do this,” Rosenbrand said of the chemical sprays. “I had no other choice.”

He started with three different insecticides in 2003, which he estimated killed about 80percent of the infestation. But the remaining 20percent of the bugs hung on. Through 2004 and 2005, Rosenbrand upped the ante with a cocktail of six insecticides sprayed throughout the growing season.

For a winery that prides itself on being in harmony with its stunning natural environment, the practices bothered Rosenbrand deeply.

“At this point I’m really frustrated,” he said. “I’m constantly spraying these harsh materials out in the vineyard, and no one is liking that.”

Not his workers. Not his neighbors. Not him.

Plus, the increased sprays didn’t seem to be working. The chemicals couldn’t get under the bark, and so the mealy bugs invariably re-emerged.

So last year, Rosenbrand asked the county to let him try a program of “biologic controls” that would tackle the problem in a more environmentally sensitive way.

With the backing of supportive UC Berkeley scientists, Whitmer granted Spring Mountain a temporary exemption from the insecticide requirements, allowing the experiment to go forward under tight restrictions.

The agriculture commissioner made it clear he would pull the plug if the program wasn’t working, Rosenbrand said.

Most of these insects feed directly on the mealy bugs, hunting them down and devouring them.

But two of the most promising critters in Rosenbrand’s arsenal are teeny parasitic wasps, called coccidoxinoides peregrins and anagyrus pseudococci. Researchers released 95,000 of the 1/32-inch long coccidoxinoides wasps last year, and a smaller number of its larger cousins.

By the time these wasps are done with the mealy bugs, they probably wished a ladybug had gotten to them first.

Both wasps attach to the vine mealy bugs’ soft bodies, laying eggs inside them. When the eggs hatch, the wasp larvae eat the mealy bugs from the inside out.

To make things worse, Rosenbrand and his crew dispersed 2,500 cards that emit the pheromones of female mealybugs, confusing the winged male and preventing him from reaching his intended target.

All of this takes money, about $7,000 in bugs alone last year to treat the 10 acres. That’s less than the cost of the six different pesticides, but doesn’t include the researchers, who are working for free.

Frey said Spring Mountain’s work is admirable, but the cost of replicating the intensive program likely puts it out of reach for the average grape grower. Hopefully one or two of its methods can be identified as most effective, Frey said.

Rosenbrand’s not totally sure which methods worked last year and which didn’t. Though the minute pirate bugs sound fearsome, it’s hard to tell if they’ve accomplished anything, he said.

What he does know is that by the end of 2006, none of his vines carried that tell-tale signs of sticky honeydew on their trunks.

“It seemed to me like every time I looked, the numbers were down,” he said.

Whitmer said he was encouraged by last year’s results.

“I was impressed. I am cautiously optimistic that their biological control program is working,” Whitmer said.

Based on those results, the county extended the program’s approval through 2007.

A lot is riding on the program. The California wine industry has worked hard to bill itself as offering an environmentally sustainable product. More and more “green” wineries are touting their credentials as organic or biodynamic.

A successful natural solution to the vine mealy bug problem could help the industry combat the problem while preserving its green reputation.

But widespread insecticide spraying programs — some of which kill not just mealy bugs but all insects in the area — could make grapegrowers’ claims of sustainability hard for some consumers to swallow.

Rosenbrand’s team returned to the vineyard this week, hunting for remaining mealy bugs and releasing new batches of wasps and lady bugs.

In one morning, he and his vineyard crew released 200,000 lady bugs, which arrived by mail just a few days earlier from a nursery in Canada.

As Rosenbrand plopped handfuls of the ticklish bugs onto the vine foliage, researcher Monica Copper gently tapped tiny wasps out of a glass vial onto vines where mealy bugs remained.

While hesitant to tout the program’s success just yet, the best news for Cooper last week was that she found populations of adult wasps that had survived the winter in the vineyard. The dead bodies of mealy bugs that have been “parasitized,” by the wasps were another encouraging sign, she said.

As gruesome as that report may be to some, the news brought a broad smile — and a hint of relief — to the vineyard manager’s face.

“It’s a vine mealy bug graveyard out there.”

You can reach Staff Writer Kevin McCallum at 521-5207 or kevin.mccallum@pressdemocrat.com.