Bluebirds Settle in at Spring Mountain 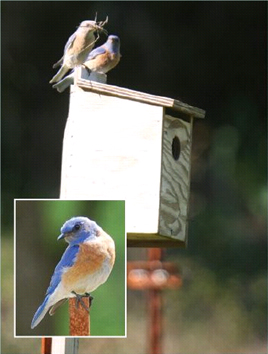 Bluebirds—hundreds of them—are bringing happiness to Spring Mountain Vineyard. Not just any bluebirds, but “green” bluebirds. This historic Napa Valley wine estate is using bluebirds instead of insecticides to combat the bluegreen sharp-shooter, a pest that infects vines with a deadly disease that could wipe out California’s vineyards.

Vineyard Manager Ron Rosenbrand was determined to find a natural predator for the sharpshooter. His next task was figuring out how to attract bluebirds to the vineyard’s 845 hillside acres on the slopes of Spring Mountain. Taking a cue from the baseball movie Field of Dreams—If you build it, they will come—Rosenbrand began installing bluebird houses throughout the vineyards in 2007.

“In 2009 most of the blue-birds flew south for the winter, but not in 2010,” says Rosenbrand. “So many have been born here and we have so many bird houses, the bluebirds consider this home.”

He adds, “The bluebirds have not only done an incredible job as hunters of one of the vines’ worst enemies--but they’re a beautiful addition to the scenery.”

For reservations to schedule a wine tasting—and to see the bluebirds, whose eggs hatch from March to June—at Spring Mountain Vineyard, call (877) 769-4637 or (707) 967-4188, or visit www.springmountainvineyard.com.