Profiling the Spring Mountain District of the Napa Valley

"Cabernet Sauvignon is the most celebrated grape of Spring Mountain. The wines feature powerful and pronounced tannic structures. The wines are noticeably aggressive, arguably the most full-throttle wines of the Napa Valley." Cabernet vineyards nestled among olive trees on Spring Mountain On a recent mid-winter afternoon, sitting in the great room at Cain Vineyard & Winery on top of Spring Mountain, great slashes of wind-swept rain pounded the tall mullioned windows, finally washing down the panes as if one were trapped in an automobile inside a car wash. Fifteen minutes later, while the torrents persisted up on the mountain, down below as one descended into the village of St. Helena, the velocity of the rain had withered to a mere drizzle. 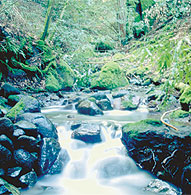 Later that night the myriad springs on the mountain would carry the rain water down to the Napa River below, as worried Napans all along its banks watch closely for any signs of overflow.

Such is an example of the vagaries of weather that define and affect the viticultural landscape of Spring Mountain as it wends its way westward above St. Helena beginning at an altitude of 400 feet climbing to nearly 2,600 feet on the upper reaches where it meets the Sonoma County line. Spring Mountain receives more than double the annual rainfall levels of the Napa Valley floor, with totals in some seasons up to 67 inches.

The climate of Spring Mountain is generally classified as Region II. Compared to the valley floor, the region has more moderate temperature ranges — cooler days and warmer nights. This moderation results from a typical daily cycle during the growing season. Mornings warm more quickly than the valley floor 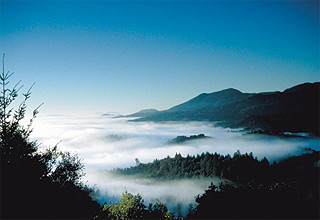 because most vineyards lie above the fog line, while afternoons are cooled earlier by maritime winds from the Pacific Ocean. This afternoon cooling directly from the ocean is unique to Spring Mountain, and does not occur in other areas on the eastern slopes of the Mayacamas. Overall, the climate produces an unusually long growing season for Napa Valley with bud break in mid-March, veraison about July 1, and harvest from mid-September to November.

Spring Mountain is the middle of three Napa AVAs located on the Mayacamas Mountains and is not a peak in of itself but rather an area at the north-south midpoint of the range. As one might expect, it is warmer than Mount Veeder to the south and cooler than Diamond Mountain to the north.

Soil depths here vary but tend to be deeper than in other nearby mountain terrain. Spring Mountain soil types have two distinct characteristics: the region contains only residual upland soils and no alluvial soils, which predominate on the valley floor; and, the soils consist almost equally of Franciscan sedimentary rocks (sandstone and conglomerates) and Sonoma Volcanics. This combination distinguishes the region from adjacent mountain areas. To the north, in the Diamond Mountain District, soils are almost entirely of volcanic origin, while to the south, in the Mount Veeder area, soils are primarily sedimentary.

Spring Mountain, officially established as an AVA in 1993, was described 25 years ago by a prominent wine writer as “probably more responsible than any other Napa hillside for creating the mystique of ‘mountain grapes.’ ” It may also be the oldest of Napa's mountain growing areas with documented evidence of vineyard plantings in the late 1800's. 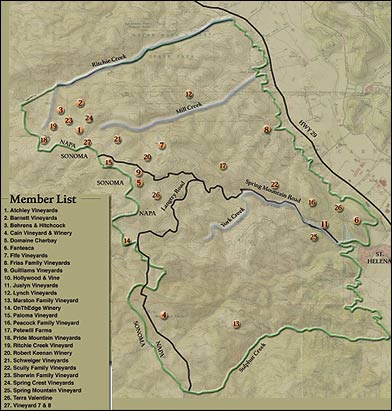 Encompassed within its bounds are about 8,600 acres, of which about 1,000 are planted to vineyards. Currently the region has about 22 wineries and 30 vineyards. 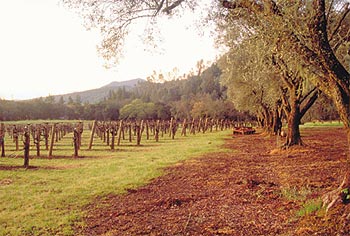 Grape growing and winemaking declined in Spring Mountain from 1910 to 1940 due to the onset of phylloxera and Prohibition. The first reawakening of viticulture came in 1946, when Fred and Eleanor McCrea planted a small vineyard north of Mill Creek, and then in 1953 founded a legendary winery called Stony Hill. The resurgence began in earnest in the late 1960s and 1970s -- with the founding of several wineries, including Ritchie Creek, Yverdon (now Fife), Spring Mountain Winery, Smith-Madrone and Robert Keenan.

Red varieties account for 81 percent of Spring Mountain vineyard acres. Of these, Cabernet Sauvignon makes up more than half, and Merlot more than a quarter. The remainder includes Cabernet Franc, Zinfandel, Petit Verdot, Syrah, Petite Sirah, Malbec and Pinot Noir. White varieties comprise 19 percent of vineyard acres. Of these, Chardonnay predominates by far. Others include Riesling, Chenin Blanc, Sauvignon Blanc, Viognier and Muscat. 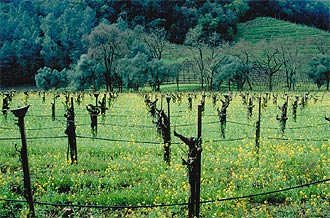 Cabernet Sauvignon is the most celebrated grape of Spring Mountain. The wines feature powerful and pronounced tannic structures. The wines are noticeably aggressive, arguably the most full-throttle wines of the Napa Valley.

The conditions or primary features of Spring Mountain, which distinguish it from adjacent areas in Napa and Sonoma county, according to the AVA’s creators are:

Well, on a recent holiday afternoon, we at Appellation America set out to do just that — find the commonalities in both terroir and style of Spring Mountain Cabernet Sauvignon. Follow the link below to my full report on our findings when we assembled a number of the region’s top winemakers to taste blind the wines of their appellation, with the intent to pinpoint a ‘Signature’ of Spring Mountain.